Marrying a Colombian: 4 Customs to Be Aware of 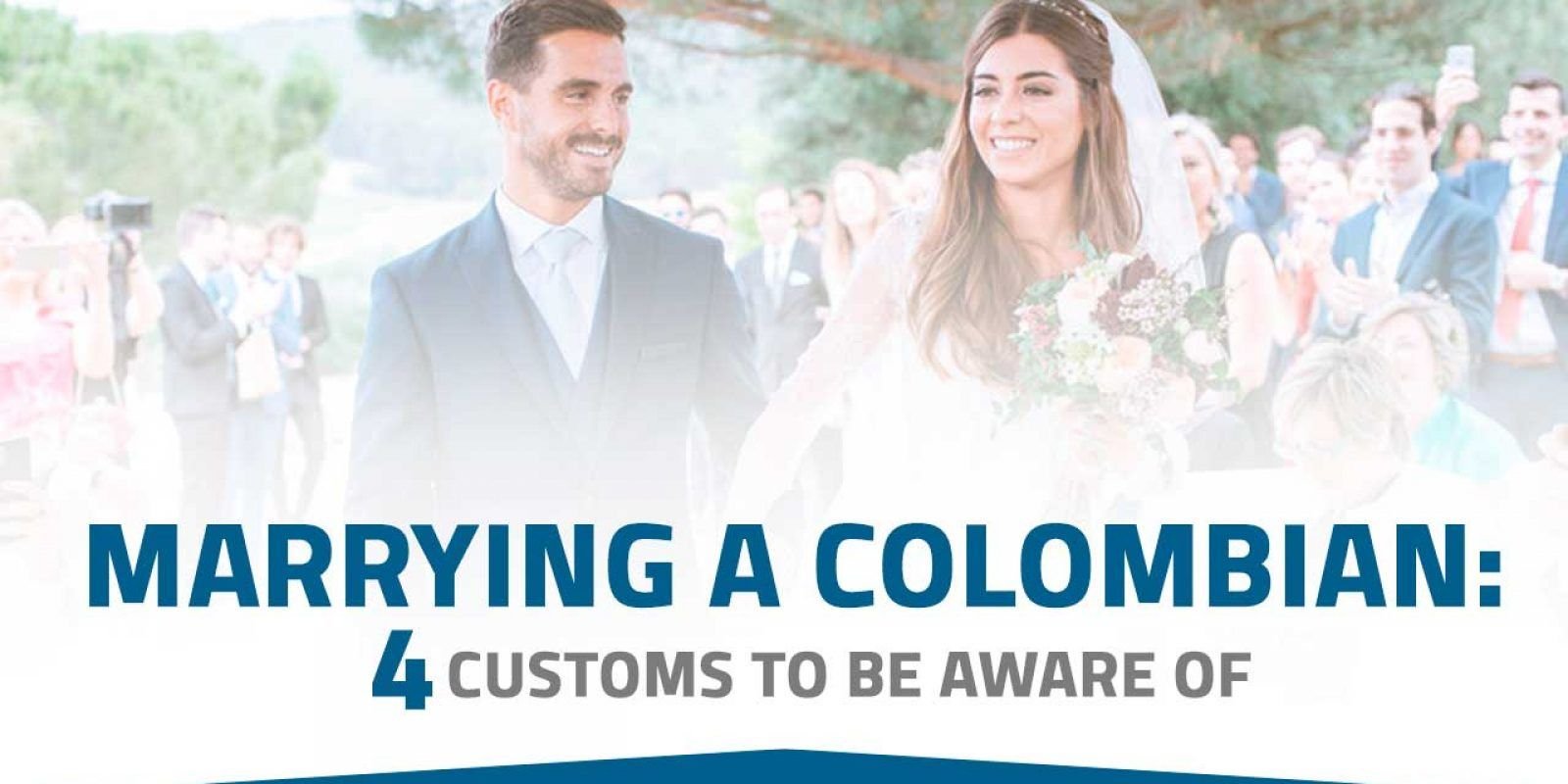 A Colombian marriage is usually met with fanfare and celebration. As a country full of passion and life, Colombia’s people are as romantic as they are fiery when it comes to their life partners.

If you’re a foreigner marrying a Colombian, the exchange of culture and tradition should be a thing of joy. But this doesn’t mean that it’s without its challenges.

When you’re in a relationship with someone, you’ll likely learn most of their habits, likes and dislikes before you’ve got down on one knee. However, it’s easy to miss some different cultural characteristics, especially if there’s a language barrier at play.

With this in mind, we’re going to explore some Colombian customs – wonderful or otherwise – to know about before you’ve reached the wedding day.

The Latin fire is not a simple cliché used to describe Colombians. They are people of intensity, which makes them so magnetic.

Of course, some Colombians are more reserved than others, but their desire to live life bleeds through all the same. Whether it’s politics, football or a game of Parqués, Colombians immerse themselves in to the things that give them the most pleasure. And these interests can manifest themselves in interesting ways.

On the one hand, you’ve got the pleasure of being around someone that’s captivating. They’re excitement for a subject or activity endears them to you in a profound way, and you can’t help but want to be around them.

On the flip side, this intensity can provoke negative reactions of the same magnitude. Being an impassioned person means that discontent can seem more extreme than it actually is. This can result in arguments seeming more severe from your perspective than they do for your Colombian other half, causing a complicated asymmetry between the two of you.

In any case, it’s important to explore these differences in communication together, empathise with the other’s feelings and come to a reasonable compromise about how to deal with difficult situations.

Ready to marry your Colombian partner and need to M-type Marriage Visa? Expat Group has already helped hundreds of foreigners like you successfully apply for the migrant class visa. Book an appointment with us for more information.

2. Most Colombians have strong family bonds

Family is everything in Colombia. Many occasions, like Sunday dinner or going out on the weekends are done so with the whole family, and the value placed on spending this time together is significant.

On the whole, it’s a wonderful quality to have in a partner. Colombians’ loyalty to their families makes them role models for many families in the Western world, not just for the community it brings but for the love that is shared. This sense of being part of your Colombian spouse’s family is powerful, and should be something that’s celebrated.

There can be, however, complications to your plans with your Colombian partner as a result of this. Plans to spend time as a couple are sometimes compromised by the inclusion of other family members, complicating arrangements between foreigners and their Colombian spouse.

Family comes first can also mean a restriction on your long-term relationship goals. If your plan, for instance, is to eventually move abroad as a couple, your Colombian other half may feel the need of being close to their family (geographically speaking) the decisive factor.

Ultimately, the most crucial thing is to be clear about intentions and how time is spent together and with others.

Men in a heterosexual relationship, for instance, are expected to be the primary earner, whereas the woman are seen as the primary care givers to children (if there are any). Furthermore, it’s not uncommon for men to pay for holidays, dinners and social events. Likewise, women are expected to dress and act in a ‘feminine way’.

While Colombian baby boomers and gen-x are more likely to follow this strictly, diversions from these roles are considered as fairly abnormal by Colombians of all ages. The culture of machismo or being a ‘masculine man’ perpetuates this attitude and rightly or wrongly, many Colombians view men and women’s roles in a relationship as non-negotiable.

It’s key that the way you view your position as well as your Colombian partner’s position before marrying.

Looking to get an R-type Marriage Visa? Book an appointment with one of our visa consultants to get the process started today.

An interesting aspect of interacting with your Colombian other half is not only in what they say but what they don’t. Colombians love using their body to communicate and do so on a surprisingly regular basis.

The most common example is when Colombians use their mouth to indicate who the subject of conversation is without saying their name. Funny at first, this is often something that you end up using yourself as a communication tool.
Additionally, Colombians tap their neck with their middle or index finger to show that they’re is or would be a problem with something. Known in Colombian Spanish as paila, this non-verbal communication is a colloquial way of saying you’re screwed and is generally considered as playful and light hearted. If you see your Colombian partner doing this, you know they’re talking about something where there’s potential deep trouble afoot.

2 comentarios en “Marrying a Colombian: 4 Customs to Be Aware of”